The Metalock process originated in the oil fields of Texas in the mid 1930’s, prompted by the need to overcome the risks of welding in the potentially explosive environment of oil production. Engineers H. Harman and L.B. Scott developed the ground-breaking repair system, successfully eliminating the use of heat. Other advantages were also soon obvious, among these the elimination of distortion, which in turn did away with the necessity of re-machining in some situations. Subsequent development by U.S. forces in World War II, during which it was used to repair Navy ships, led to the confirmation of the technology. It then rapidly spread to heavy industries, and particularly general marine use.

Andre Mortimer, President of MIA: “We are now relaunching the Metalock process into the market. The technology was widely taught and very well-known up until the 1970’s, but our member companies now find that a whole new generation of engineers has grown up with little grounding or understanding of its uses. In some cases, even many Chief Engineers are virtually unfamiliar with it.”

A gateway to a worldwide network of certified specialists

The Metalock International Association is a worldwide network of specialist engineering companies. It was formed in 1953 by 14 companies who recognised the unique engineering potential of the Metalock process. MIA has member companies in over 70 countries around the world. Unique in the field of industrial and maritime repair, MIA exists only to promulgate knowledge, understanding and high-quality applications of the Metalock technique. They do this by providing training for engineers and surveyors, along with offering seminars and conferences. Promoting the Metalock process and assisting in developing excellence in engineering repair knowledge, MIA also fosters research and operational cooperation among its members. Annual meetings are held to share experiences and strengthen connections, with both members and MIA staff constantly collaborating across the world, especially when a member is tackling a complex project. This interaction between specialists is an additional strength of the MIA, coupled with the access it offers to the large library and collection of Metalock materials, only available to its members. David Fowler, Company Secretary has stated: “MIA membership gives confidence in the quality of the technique and shared resources when needed. It adds up to a worldwide delivery capability with a standard quality.

“MIA is built around the repair process. We issue certification to member companies, and they work as a network to share knowledge and resources. All member companies also have other complementary capabilities, such as specialist welding, on-site machining and valve repairs, meaning any member can deal with large and very specialised jobs in conjunction with other members.” There are alternative companies that carry out metal stitching, including some who even carry the Metalock name; however, MIA strongly recommends that only member companies and individuals be consulted for potential repairs. It is not uncommon for MIA members to be called in to correct earlier repairs performed by unregistered repair companies. A full list of Metalock members can be found on the MIA website: www.metalockinternational.org 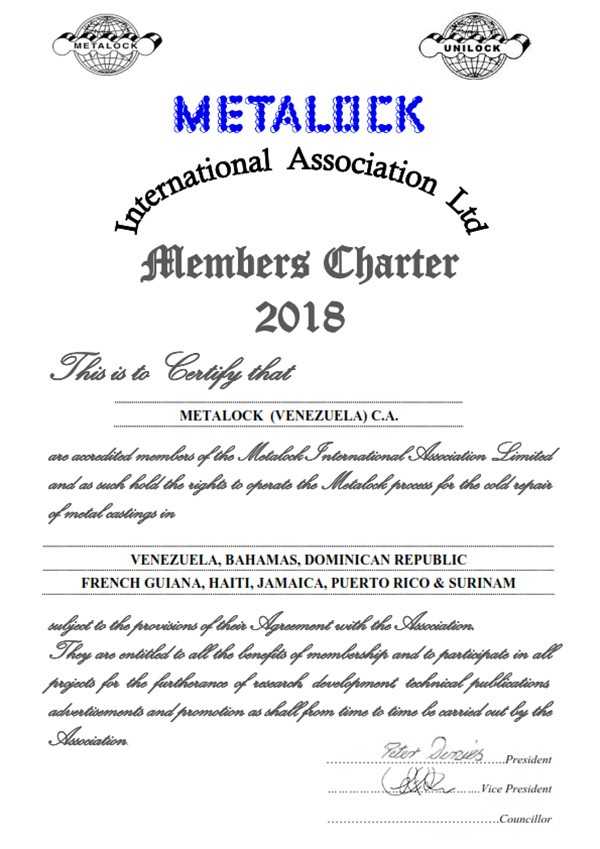 “MIA has become a unique organization operating in over 70 countries and the Metalock is now synonymous with rapid response and high-quality repairs – often in challenging environments. The greatest asset of the Metalock International Association does not rest in any Bank, and yet it is an asset of which we may well be proud and one of which we shall be extremely value to the highest degree for it is our reputation for workmanship of the finest order – hence it is something we should not jeopardise for any reason whatsoever.”